This tutorial focuses on simplicity and easiness. If you want more details, please read the DIY_USB_adapter page.

Welcome to the straight-to-the-point tutorial on how to build the GIMX DIY USB adapter, solderless!
Everything you need to know to build and get started with the adapter is covered here if you read it carefully!
I suggest you read it through at least once, just to have a heads up on what you're going to do.

Get the required parts

It should come with a set of cables and look like this: 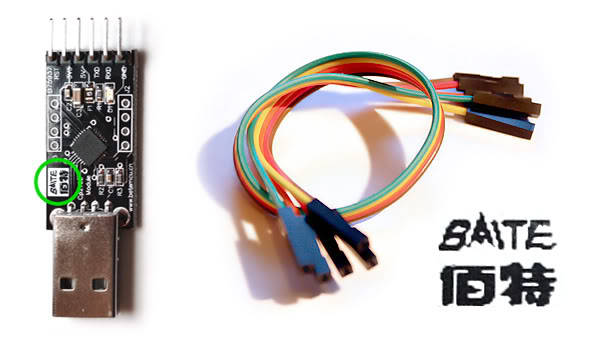 You need the one with pins to be able to connect everything without soldering.
You can either take a Teensy 2.0 or a Teensy ++ 2.0.
The other Teensy boards (3.x, LC, ...) are NOT compatible!

And if you don't already have it, you need to get some USB cables, like these:

I'll be using a match box for this tutorial. Another popular DIY project box is an empty Altoids tin for example.

For insulating or securing parts and cables in place. Regular adhesive tape should work as well.

For bundling everything up - easy to undo and redo if you don't get it right the first time.

And hopefully you have some basic tools like a hobby/utility knife or scissors laying around. 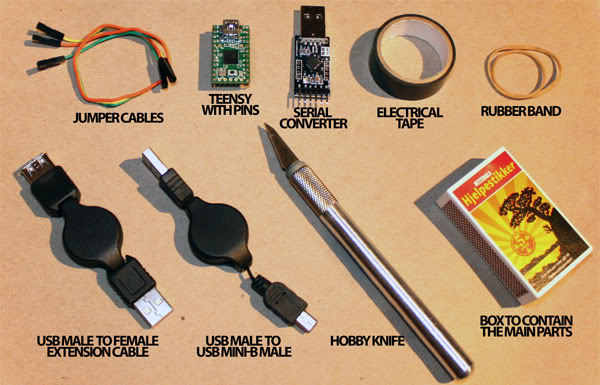 Note: don't use retractable cables as shown in the above picture, use shielded USB cables instead.

For easy access later on, just save/extract all the files to your desktop.

Next, I recommend you insulate the serial converter using the electrical tape if it's going to be in a tight enclosure, to avoid any shorts between it and the Teensy.

Now connect the cables as shown in the picture below. (Notice how the Teensy is placed! Pins should point left with the USB connector pointing away from you.)

The next two steps are only required if you're putting the parts in a very tight enclosure and need the parts to take up as little space as possible.

1. Bend the pins with the jumper cables attached to them inwards, slowly to prevent them from snapping, and tuck the cables between the pins on the opposite side.

2. To save some extra space, I usually wrap the cables around the Teensy. There's no special way of doing this, so you just need to figure out what works best for your build.

Remember not to cover up the button on the Teensy as we need to press it later on. (Also, this is where the rubber band will come in handy!)

Cut some holes in your project box of choice to match the Mini USB plug on one side and regular USB plug on the other side. Do some tests and make sure everything aligns up before securing everything in place. In the picture below I've bundled everything up using the rubber band and secured it to the box with some electrical tape (double sided tape or hot glue works wonders too if you have it)

Voilà! You're done building the adapter.

Load the firmware onto the adapter

Connect the adapter to your computer using the USB Mini-B cable and a LED on the Teensy should turn on or start blinking.

Now start up Teensy Loader (teensy.exe on your desktop) and follow these steps:

Press the button on the Teensy and the LED should turn off. In Teensy Loader, open atmega32u4.hex from the firmwares folder on your desktop. Click the Program button and you should get the message "Download Complete" Now click the Reboot button and your GIMX USB adapter is ready for use!

If the Teensy loader does not detect the device, try with another USB cable, and another USB port.

This step is pretty straight forward. Simply run setup-X.YZ.exe from your desktop and follow the installation steps, preferably with the default installation location.

When the installation is done you should have three GIMX icons on your desktop.

GIMX comes pre-loaded with a few configurations, but let's take a quick look on how you can make your own configurations using the GIMX FPS Config Tool (As you can tell by the name, this is mainly meant for setting up a basic FPS configuration.)

You can also check out the Configuration Requests and Index thread for other configurations available for download, or post requests that we or the community might be able to fulfill.

NOTE! To open the configuration directory, click on File>Open config directory in gimx-config, gimx-fpsconfig, or gimx-launcher.

That's it. You're ready to start using the GIMX USB adapter!

(If the Device box is blank, refer to the Support section and report the problem if a solution isn't found)

If there is a "No controller detected." error message when you start GIMX, double check you wiring, and try to invert TX and RX in case it's still not working.

Now if you're in the menus of your console and press the WASD or arrow keys on your keyboard, you should be able to navigate through the menus, meaning you've succeeded! If not, or if something went wrong elsewhere, go back and make sure you followed every step to the letter and try again, then let us know if nothing you try works.