Hi, I'm trying to build a DIY GIMX adapter myself. The purporse is to use the DFGT wheel on PS4.

Executed the GIMX Laucher, where the device was recognized on COM3. I've loaded the config LogitechDrivingFOrceGT_29.xml. Run the Check: Okay
Tried to start GIMX. Got the error message:
"../gimxcommon/src/windows/async.c:395 async_write_timeout: WriteFile failed: timeout expired.
Error: failed to send data to the GIMX adapter"

Looking for a fix, someone said it worked after reinstalling GIMX and the firmware. I realize I had not touched the firmware before, so I do the procedure: Help>>Update Firmware a pop-up appears and I select "EMUG29PS4.hex" because it seems like the right one. A scary message appears saying this is only for USB to UART and Pro Micro Board. Reluctantly I proceed, as this is apparently my case (I got a bit confused with Arduino board versions here). It asked me to plug both ends of the adapter into the PC, and I do so.

After that all went to shit.

Basicaly: from now on the GIMX adapter no longer show up in the PC. GIMX launcher does not recognize it when I plug it in. The PC doesn't recognize it in COM3 anymore. Tested with all the USB ports, nothing. They all work fine with other devices.

Now: I believe the issue is either:

1.The firmware installed. If this is the case, how can I recover the firmware?

2. Most likely, I'm afraid I broke the board. Some connector might have burned, I don't know. Tried to smell it but couldn't tell. I admit I was careless while handling it...I had no Isolating tape with me but in my eagerness to test it I did the thins with everything exposed. Worse, I messed with the connections with the devices on, without unplugging both USB ends first (note I did no soldering, the Arduindo has female plugs for jumper cables). The Arduino board has LED's labeled RX and TX that were blinking when I began setting it up, but after this the light won't come up anymore.

I can get a multimeter from a friend to test the board, but I'm a noob at electronics and don't even know what I should test. Currently, I believe the USB to UART adapter is fine, but the board is dead. Do you guys know how I could test it with a multimeter? I want to determine where exactly is the problem first. And then, could the board be saved? It's the most expensive and hardest to get part

Thanks in advance
Edu
Top

To make sure it is dead or not, try open Device Manager and look at Ports (COM & LPT) section. 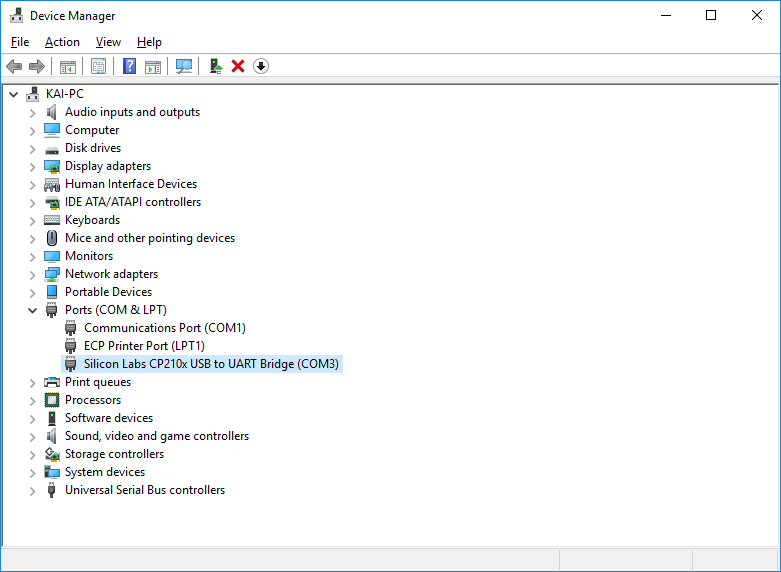 If you don't see the line USB to UART there, the answer is yes, it's dead or your USB port is dead. (Make sure you installed the lastest gimx version, because conflict bug in usbdk from very old versions disabled all USB ports at startup)

The best idea I think is buying a new one, and never plug in USB ports which got quick charge or high voltage capability (they have 12V instead of 5), use 5V USB ports only.

About how to test it:

Thank you friend. The USB to UART is working fine, I just plugged it in and it shows just like your image. THe problem is the Arduino board.
As I typed these words, the board thing popped for a second in the PC, but the disappeared again. There is definitely something fishy with it. Perhaps it's the cable? I'll see if I have some other cable that fits..
Top

Tested with another cable, nothing.

It's definitely the board. I think the mini-USB connector is faulty. It briefly came alive once for a couple of seconds. Is there anything I can do to try and repair it?
Top

After some more fiddling, here's what I found out:

When I plug in the mini-USB port in the Arduino, a green LED named ON comes up. Above that, an orange LED labeled "L" blinks for a milisecond.
This Orange "L" led used to stay on before I started having issues.
I discovered that, if double tap the red reset button, the orange "L" led comes up AND the PC recognizes the board for exactly 8 seconds. After that, it fails again.

I don't know if there is a problem in the contact, the soldering of the port or maybe the circuits in the board. I find strange that it stays up for exactly 8 seconds when I double press the reset button. The fact that the PC recognizes it in that period, means that somehow the current does flow, contacts does work and the Arduino itself is working. Even GIMX recognizes it if I refresh it in time. It's like something is purposefully cutting it off. Like a PC with a corrupt OS, it powers up, but fails to boot and then shuts down. DOes this make sense?
Top

Okay guys, I figured out the problem. The GIMX-loader is bricking the Arduino when it tries to upload the firmware. I tried it several times with the "EMUG29PS4.hex" profile, which by name is the only appropriate one. I swapped the RX/TX pins. And also tried the EMUPS4.hex file. Same issue.

So I can't load the GIMX firmware into the Arduino, it immediately breaks it. Please help, is there an alternative way to load the firmware?

By the way, to solve the issue of the Arduino not showing up on COM ports, I use the following guide (it really works):

You will need to download Arduino IDE for this to work. Get it here: https://www.arduino.cc/en/Main/Software


ometimes Leonardo Serial port will be locked by the sketch. It will lost its COM Port in Device Manager.

Inadvertently I found a method to fix this issue. There are two steps:

Please plug Leonardo to your PC USB cable. Open the device manager. Press RESET button on the board.
Then Device manager should appear a COM port named "Arduino Leonardo bootloader (COM x)". After a few seconds, it disappear again. Don't worry, that is no problem. it means the bootloader is fine. If you get this information, you could go Step 2.

Open a "Blink" sketch on Arduino IDE, select "Leonardo". Now there is no COM port. Press "RESET", ans select the COM port in arduino immediately. Wait a minute, Com port disappear again.
Click "Upload". After IDE has completed verifying, press "RESET" at once. If everything is OK, the COM port has been fixed after uploading.

Maybe you need to try several times, because the correct time to press "RESET" is not easy to be caught.

After you upload arduino board firmware, it won't show COM port in Device Manager anymore. So don't panic

You can try this way to reupload firmware on it:

- Connect both sides to PC.
- Use Update firmware funtion in gimx-launcher.
- When it says "Unplug/replug the USB cable from/to computer USB port", press RESET button on arduino board.

Your board firmware will be updated
PS4 enthusiast.
Top

It is working now

In the end...the only reason it didn't work the first time is because...I inverted the connections to the Console and the PC

Then since it stopped showing up on the PC I thought I broke something. After uploading the firmware again and properly connecting all cables, it worked flawlessly.

Thanks a lot guys, GIMX is really awesome.
Top

Glad to hear that